A picturesque Mediterranean Resort with a state of the art clay tennis court, Tennis Academy and ATP Venue 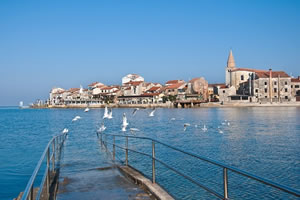 Umag is the first tourist destination when entering the northern part of the Adriatic coast, is a picturesque Mediterranean town-port. The sea is crystal clear and suitable for swimming from May to October.

Umag has a rich and interesting past: it was discovered by the Roman nobles who decided to usurp it as their summer residence, while the Germanic kingdoms, the Byzantine Empire and the Frankish state fought over it until it recognized the authority of the Venetian Republic in the late Middle Ages. Umag stayed under the reign of Venice until its fall in the late 18th century. The legacy of those times remains preserved in numerous Renaissance and Baroque Venetian houses of the old Umag town centre, parts of the walls, towers and churches.