First4Tennis guarantee top quality coaches whether they are running academy training or coaching beginners. Predominantly British, all our lead coaches will be experienced in high profile overseas locations though we often recruit hand-picked local experts to assist and invite groups of local players to mix into competitive and social activities to add to the experience of F4T guests.

Add to this the experienced on court management each week or long week of the F4T team, personally overseen by Rupert North who has over 25 years’ experience of running successful overseas tennis academies and training coaches for this market. You will find that everything is catered for, including state of the art technical analysis and where possible holding indoor courts on continual standby should the normally sunny weather of our hand picked tennis destinations surprise us with a shower!

Through exclusive arrangements First4Tennis are able to offer tennis holidays and training at the best destinations, many iconic, and we offer opportunities to be coached by ex Wimbledon players including more than one ex Champion! Wimbledon Champion of 2001 Goran Ivanisevic stayed around to socialise and share his birthday cake after one F4T academy in Umag! In 2017 former British No 1 and BBC commentator Andrew Castle joined us in Mauritius for our Private Travel Company week. The social element is a big part of the First4Tennis philosophy. Leading the sessions we have a host of top British players and coaches who have so far included GB Davis Cup stalwart Danny Sapsford and Wimbledon Head Coach Dan Bloxham. All coaches are hand chosen to offer tailored, high quality sessions to each group, with fun and the social element being a major component. Whether you are a beginner or an aspiring tour pro, your sessions will be focussed to help you improve, and enjoy yourself. 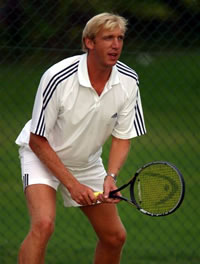 An active competitor over the years and most recently internationally as a Veteran and a member of the Queens Club teams, Rupert has over 25 years’ experience tailoring and running coaching courses across Europe for all standards of players. Having attained the USPTR Pro Level qualification Rupert’s management of tennis resorts internationally culminated in the accolade of winning the “Best European Tennis Resort” award 3 years running. This, alongside direct experience of playing and coaching at globally renowned academies including Bolletieri’s Saddlebrook, means Rupert really knows how to deliver the best tennis experiences and holidays in the world. 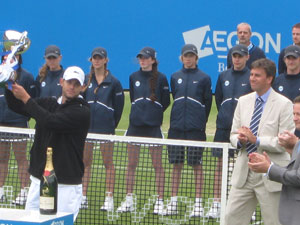 A British Tour player, County Champion, then Sussex Captain for 15 years. Following a successful city career, launched and established an international sports consultancy that works with leading events and brands.
Appointed England Seniors Captain twice having reached World Top 20 (o/45) and winning national events. Qualified as a coach and led a team of coaches at an international centre. Chairman of the Eastbourne ATP/WTA event (Aegon International) for 5 years before becoming an GB Chairman of Performance Tennis and 10 GB Davis Cup ties through 2013-6, including the historic run of wins against USA , Croatia, Russia, France, Australia, and Belgium- culminating in the triumph of Andy Murray leading the team to pick up the Davis Cup trophy for the first time in 79 years.

Rupert and Richard teamed up within First4Tennis in 2014 to use their knowledge and connections to deliver the most special bespoke tennis experiences in the world to players of all standards.